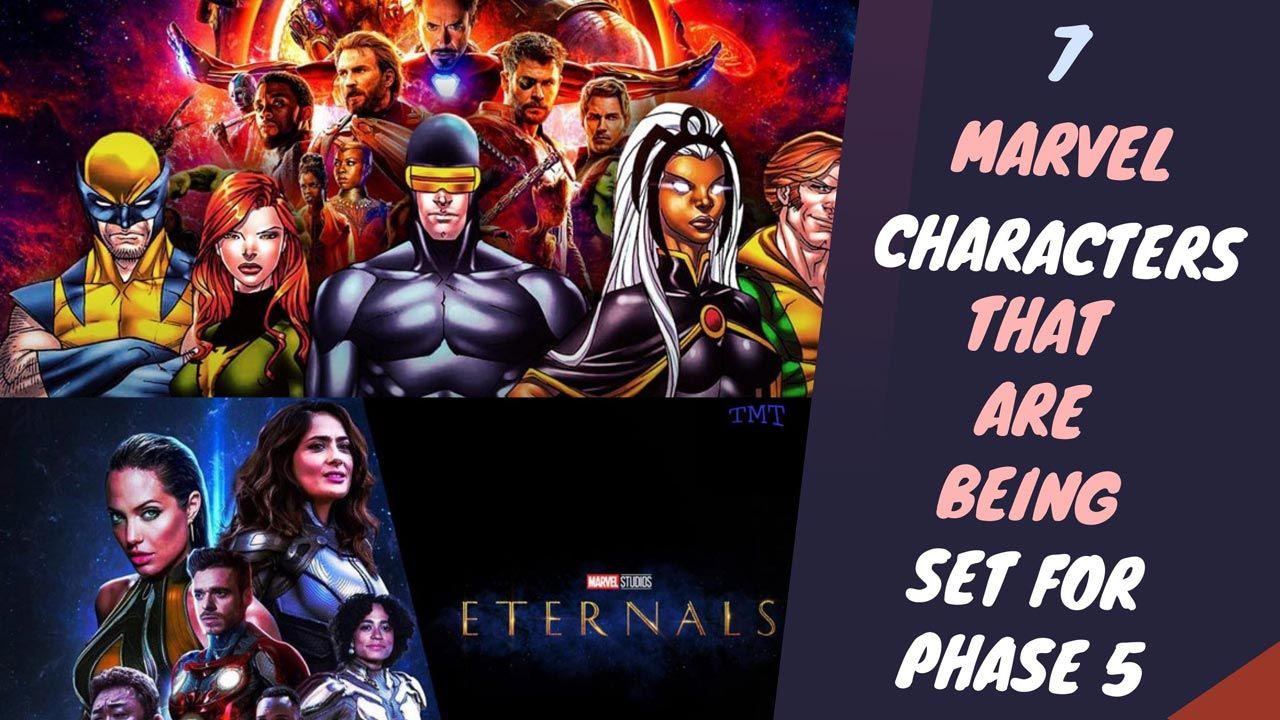 Phase four of the MCU is already busting with outstanding Disney+ series WandaVision, The Falcon, and Loki but even more exciting is what it seems to be promising for phase five.

The Phase four is going to introduce Mutants, Eternals and even the multiverses directly starting from the Multiverse of Madness and possibly all three Spiderman swing alongside.

Each phase of the marvel cinematic universe has managed to add new characters and new dimensions to the shared world opening up new stories and possibilities that would have seemed impossible before with Thanos snap.

But, thanks to our The Hulk, and Ant man’s time heist plan based on the Back to The Future, MCU is set to expand even more with new heroes and new threats.

Let’s look at some of the phase 5 characters being set up in phase 4.

7 MCU Phase 5 characters being set up in Phase 4

1. X-men and the Mutants

Now, as Disney owns both Marvel and 20th Century Fox that held the rights to the x-men and the mutants as well as marvel’s first family the fantastic four.

It’s not long before we see previously locked characters fighting alongside our new Avengers. The mutants are already on a way to MCU, the Madripoor from The Falcon and the Winter Soldier has been very own place of mutants in comics.

Everyone had expected WandaVision will introduce Mutants to our superhero Family, and for once (after seeing petro) we thought it came to light but it was a Joke, a bad Joke Marvel.

The next big team to join the Marvel Cinematic Universe is the team of near immortals The Eternals.

Marvel has already released a 16 sec clip of Eternals in its MCU Phase Four trailer teasing all audiences, It’s not long before the eternals makes its way to the big screen.

We are going to see Game of Thrones knowing nothing John Snow as the black knight. Not only he is a key character in the story of the eternals but also a key player in the avengers even taking the leadership.

That’s an important role with the power vacuum at the top with the passing of Tony Stark and Natasha, retirement of Steve Rogers and Thor taking off to find himself t’s likely that whatever threat the eternals uncover could be what motivates the Black Knight to step up to reform the avengers and defend the earth just like the original team did.

Blade might be considered one of marvel’s first real success stories prior to Wesley snipe’s cult favorite turn as the day walker filmed as a low budget action horror.

Series blade solidified the vampire hunter as a fan favorite ever since the MCU fans have been waiting to see blade join the ever-expanding universe.

Last year at comic-con marvel made their wish official by announcing the casting of mahershala lee is the half-vampire blood anti-hero.

A blade series was first suggested back in the heady early days of the partnership between Netflix and Marvel.

They saw success in daredevil and Jessica Jones blade along with two other members of this list were said to be the second phase of Netflix shows before Netflix and marvel went their separate ways.

One of the gems we were introduce in WandaVision besides Scarlet Witch and possibly Agatha, it’s Monica Rambo we are going to see very often as she has got call from the man in the sky.

If WandaVision established any characters, then clearly it’s Monica. The show has focused in her a lot and it’s seems she could be our next Nick Fury.

I know the WandaVision have failed to gave what we expected but it was the series on Wanda and Vision and on their family, it wasn’t about the saving earth or about Mephesto. Appearance of Doctor Strange might have ruined the originality and deepness in the show.

In the comics, she has lot in common with characters like Deadpool including a tendency to break the fourth wall and being vaguely aware she’s a character in a comic book.

We have seen Hulk a lot but a Solo movie had never been possible. A series on She Hulk will undeniably fill the absence we all have experienced all along.

Kevin Friege has not been shy about who is on his wish list of favorite heroes to bring to the MCU and that’s one of marvel’s original characters Namor.

What’s Marvel has been lacking was a king of the deep. There has been hell a lot of Easter eggs in a lot of Marvel movies referencing towards the oceans.

It’s likely that Namor could be a part of Black Panther sequel as in the Endgame Wakanda also hinted at a hot spot at the bottom of the Atlantic Ocean.

Moon knight is another character who’s intertwined in a lot of the marvel universe. He’s been an avenger (both main team and west coast a secret avenger).

Among other super beings of marvel what makes moon knight most interesting is his struggles including traumas that induced dissociative personality disorder (DID).

No casting has been announced for the series yet but that should be coming real soon.

There is a lot to come from marvel in upcoming days. The phase five is the era of new heroes and young Avengers. The old team might not end up being the priority but instead it’s looking like youth are the future in the MCU.

The upcoming Hawkeye own Disney+ and the next Ant man’s movie will introduce us to some key members of the young avengers. WandaVision has already established the two twins very importantly which we might probably get to see in Multiverse of Madness.

What’s more exciting is, it’s possible that the next Avengers movie that marks the transition to phase 5 will be young avengers those are the heroes set to make a big splash in phase 5.

So, who are you looking forward to the most let us know in the comments?