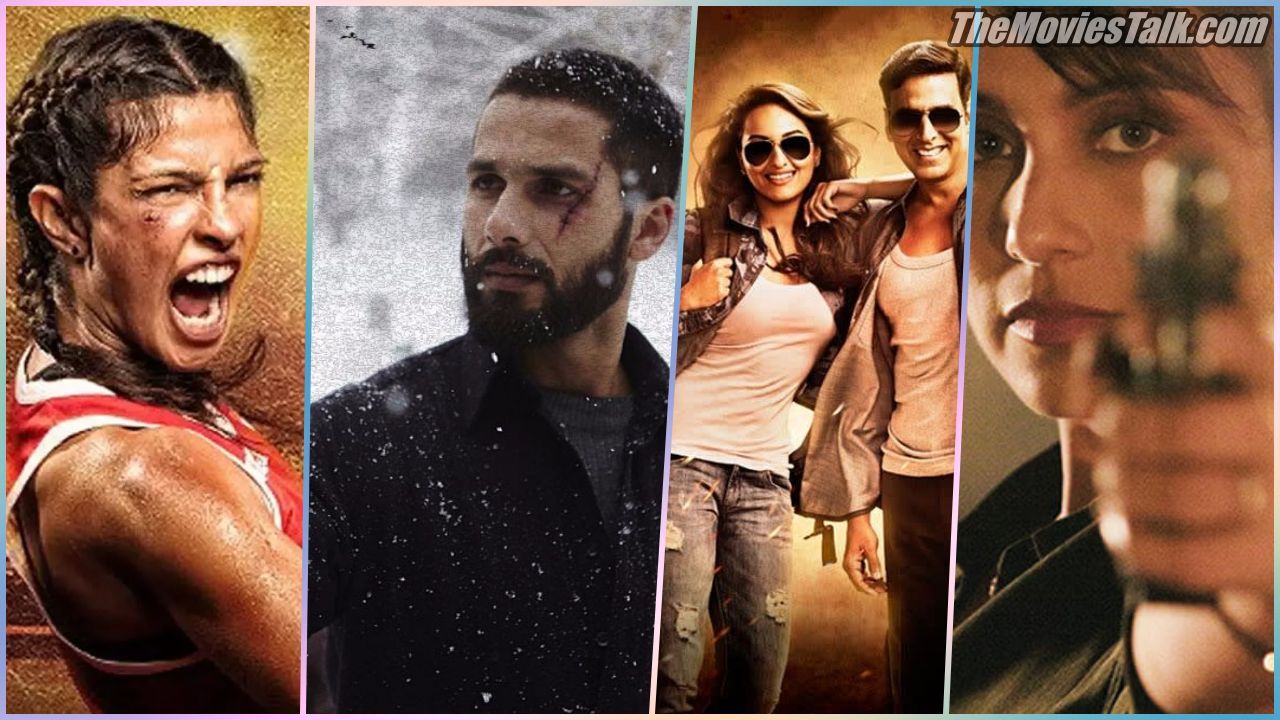 7 Top Bollywood Action Movies of 2014: As the year 2014 has ended and now it is time to count down some of the best movies of 2014.I think 2014 was a good year for the action movies. We say many great movies and full of adventure and with best of the story. This year Many high budget movies were disliked by audiences whereas low budget succeeded in wining the heart of many audiences.

Our list of 7 top Bollywood action movies of 2014 is based on critics rating, IMDB rating , Rotten tomatoes rating,how much the movie succeed in  entertaining the audiences and also the ratio of box office collection to the budget of movie.

Haider is 2014 most loved action crime  movie Directed by Vishal Bhardwaj and Release on 2 October 2014.The film was almost liked by 91% of google users and has IMDb rating 8.1 out of 10. Almost everyone liked great acting of Shahid Kapoor as Haider. The film was sucessful at box office and wined many awards such as Screen Award for Best Actor and IIFA Award for Best Actor. The movie is made in a bit of dark theme.

I think Haider is the one you should go and watch on Netflix.

Everyone loves crime thriller movies with a bit of action on it and Mardaani is one with the perfect mixture.The film got IMDb rating of 7.3/10 and were liked by about 93% Google users.The movie is all about how a dedicated Police officer deals with crime in Delhi mainly child trafficking cartel.

Mardaani was a surprise for the audience and did really great at box office with collection of about  89.7 crores INR. I will not say you will get very new type of story-line but the performance of actors still makes it watchable for more than once.So what you are waiting for its time to watch movie.

3. Holiday: A Soldier Is Never Off Duty

How could a list of top Bollywood movies would complete without a single movie of Akshay. Holiday: A Soldier Is Never Off Duty has IMDb rating of 7.2/10 and was liked by about 90% of Google users. The movie did very great at box office with collection of about ₹178.40 crore and was hit.The story is a how a soldier and his team  protect the city from terrorist who plans to rip apart Mumbai.

This is the movie you might find full of action sequences so i would suggest you to watch this movie right now.

Mary Kom is the single sport action movie in this list and might be the only one of the year that wined heart of audiences. The movie was liked by almost 93% of google users and  got IMDb rating of 6.8 out of 10.

If you do love boxing movies then this movie is meant for you so go and watch it.

Action Romantic movies has entertained us since the very first beginning but the lack of a new and well story-line always ruins our watch time but i assure Bang Bang will surely entertain you. Beside the low IMDb rating of 5.5/10 about 92% of google user liked the movie.

The movie was a great success at Box office with collection of ₹332–340 crore. You can watch this movie on Disney or Hot-star as you prefer.

Kick is full of action sequences but lacks behind by its story-line and lack of plot.Though it did very great at box office with collection of about ₹402 crore but got poor ratings.It has IMDb rating of 5.3/10 and was liked by  82% of Google users.

You can watch this movie if you love watching action movies of Salman Khan.

Singham Returns with an IMDb rating of 5.7 out of 10 and was liked by 85% Google users.The movie is full of action scenes. The movie is based on the character Bajirao Singham and is sequel of the previous Singham movies.The movie was good but not much to expect.

You can watch the movie if you would prefer it out of the list.But if you don’t want you should probably check our top movies list.

So that was it. If you think we have missed out any best Bollywood Action Movies of 2014 or you are unsatisfied with our top 7 list of  Bollywood Action movies do not hesitate to comment down below.